We have the Romans to thank for York.  Eboracum, they called it after establishing the colonia, later morphing into Jorvik when the Vikings took over and finally, York.  This is the city where Constantine the Great was proclaimed Emperor, Richard II wanted to relocate the English capital, Guy Fawkes was born, the Parliamentarians routed the Royalists in one of the great sieges of the Civil War, Rowntree’s and Terry’s Confectioners were founded (Terry’s makes the chocolate orange with the slogan “Don’t tap it, WHACK it!) and just about every pub is haunted with a ghost that is looking for someone or something (or, in one case, is fond of throwing tools at the bar staff when they go to change the barrels!)  Our last visit to York was nine years ago.  We were so enchanted with this walled city and its people that we had to make it part of The Tour and stay for a few weeks, giving ourselves an opportunity to explore every snickelway, ginnel and alley in this ancient place along the rivers Ouse and Foss in North Yorkshire.

The Little Church Around the Corner.  The fulcrum of York is at its Minster, the gorgeous Gothic cathedral situated at the highest point of the city.  The Minster was built upon existing Norman foundation of a church which was in turn built upon the original Roman basilica.  We were able to see the foundation stones of the basilica and a mosaic that hung on the wall of the structure as well walk down the original Roman road that traveled alongside of it.  Incredible.  Equally incredible were the views from the top of the central tower. 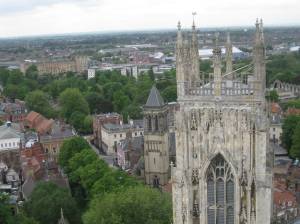 A view from the top

Only 275 steps up a winding narrow staircase festooned with graffiti from the ages and the city was ours. 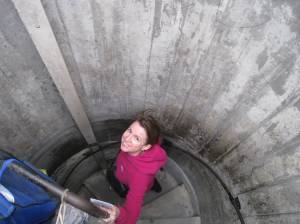 Going down the stairs from the Minster Tower

The Minster is only one of several still-existing churches from medieval times.  Of the forty-five parish churches, twenty survive, twelve of which are used regularly for services.  Two of my favorites are Holy Trinity, Goodramgate, a lovely little church off a busy street that still contains 17th century box pews, and St. Denys, Walmgate, a church dedicated to the patron saint of France (don’t ask me why).  St. Denys is notable not just because of its unusual configuration and wide nave, but also for its deacon’s love of the show “Sex and the City.”

Inside St. Denys, Walmgate. The Sex and the City church.

This kindly older gentleman talked non-stop about how much he loved the fabulous foursome as soon as he found out we were from New York and attempted to equate Carrie, Miranda, Charlotte and Samantha’s chats over coffee in Manhattan with going to church in York.  I tried to follow his logic, that extricating oneself from the workaday to commune with others is cathartic and uplifting, but I could only think of the gals’ bawdy talk as St. Denys looked down from the stained glass upon me.

At the York Brewery bar

Everyone has to believe in something – I believe I’ll have another drink.  I have not had a better pint of ale in England than in York.  Is it the hops they use? Or the malt?  Or simply the water? Whatever the elusive secret ingredient the traditional ales produced here are alive and delicious. The Yorkies are famous for their friendliness, good cheer and chattiness (refer back to the deacon!) and what better way to commune with our fellow human beings than over a pint of good Yorkshire ale.  We have made many new friends this way, from the wannabe-Chicagoan bartender (he loves Goose Island) at The House of Trembling Madness, the Geordie bartender with the unbelievably hilarious stories, many to do with bungee jumping or sky diving while piss-drunk, at the York Brewery bar and the postal worker, who likes to have a few before working the graveyard shift at the Royal Mail (he bought us a round.)

New friends at The Maltings

Current ale  favorites are the Willamette (dammit!) and the Pride of York, both from York Brewery.  We stalked the brewery bar until they put the Willamette back on. The barrel experienced a nasty fall off a still and needed 24 hours to settle. The bartenders promised it would return the following day, and they came through.  They knew what was good for them!  A plus for drinking these ales is that they are much lower in alcohol than the craft beer we used to drink in New York. So we can easily have a few during an afternoon session. Or nine. 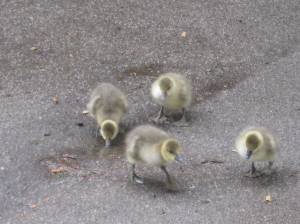 Now is the spring of our content.  York in the springtime is a delight.  Apart from a brief rain shower and an briefer thunderstorm, the weather has been extraordinary.  Our walks along the River Ouse are punctuated by visits from baby geese waddling along the path and dogs trotting alongside their masters. 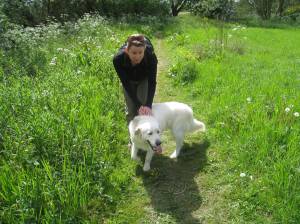 Friendly big white dog we met on one of our walks

I don’t think I have seen happier dogs than in this city; they seemed to be as gladdened by their surroundings as we are.  Dogs, geese and humans gravitate toward water, and the Ouse is no exception.  Our flat on King Street is around the corner from the King’s Arms, a pub famous for flooding when the river overflows and also for its outdoor seating along it.  Inside the pub is a plaque that marks that level to which the water rose during each inundation.  We have yet to experience this, thankfully, so all we can do is imagine it as we sip our pints on the picnic tables outside overlooking the staith.

The King's Arms. At low tide.

The white rose of The City of York

A view from the top

Going down the stairs from the Minster Tower

Inside St. Denys, Walmgate. The Sex and the City church.

At the York Brewery bar

New friends at The Maltings

Friendly big white dog we met on one of our walks

The King’s Arms. At low tide.

Rental boats on the Ouse. Notice the names.

What Henry VIII wrath. Ruins of St. Mary’s Abbey, from the Minster Tower.

Steve outside the York Brewery

To the Minster Tower

Blokes having a swift pint at The Snickleway