I can’t believe we have been on this journey for six months.  Six months!  A length of time that sounds generous in the workaday world is a mere fleck in the travel world, especially given all the places we want to visit.  If you look at the map it doesn’t seem as though we have covered much ground geographically – England, Scotland, Northern Ireland, Ireland and Wales, the Netherlands, Germany, Austria (day trip to Salzburg), Czech Republic, Hungary, and Romania, from where this post comes to you.  (We arrived in Bucharest at lunchtime after a 16-hour overnight train ride from Budapest, with visits by both Hungarian and Romanian passport control to our sleeper cabin at 9 PM and then 10 PM last night, and a gentle wake-up call by the sun peeking through the mist enveloping the mountainous Romanian countryside this early morning.)

However, what we have done in each of these countries – the cities and towns we have visited and called home for a while; the locals with whom we have practiced politics and discussed history, sports, cultural peculiarities and then some over copious amounts of ale, wine and whisky; the hills we have climbed; the trails we have trudged though; the spots of green we have lingered in doing nothing at all; and the friends with whom we have stayed, the friends who have visited us and new friends we have made along the way – has enriched us as no other experience can or probably ever will. Quality not quantity, as the axiom goes.   And this is just the start!

Our lucky rabbit which we left in York. Boo.

The rest of the year we will continue the journey through Central and Eastern Europe, then Turkey, do a loop back through Western Europe to Italy, Spain, France, Belgium and then back to London where we will celebrate the holidays.  But come January we will venture into Russia (in the winter!), the first leg of our foray into Asia, then to China, Cambodia, Laos, Thailand, Vietnam and who knows where else, and then to Australia to spend some time with my family before deciding our next steps.  Sound ambitious?  Maybe, as it is impossible to do everything lest we become one of those “tickers” venturing from city to city spending a day or two in each place, seeing each of the museums, castles, historical building and homes listed in the Top Ten Guide Book but not really experiencing any of them, or the people, the culture, the language: we don’t want to exist in that tourist cocoon.  If we did, we couldn’t have done the following:

Steve pulling pints at the Chappel CAMRA Fest. And wearing at Twins cap.

We have adhered to the philosophy of The Grand Tour by not planning too much, extending stays where it makes sense to and where we want to, doing nothing for a while but reading and watching movies, and branching off into territories new and unfamiliar.  Long-term traveling isn’t simply about visiting landmarks, saturating oneself with collections in museums, from the minutiae to the grandiose, or locating but avoiding the tourist traps.  It is about getting out of the comfort zone,  immersing oneself in a situation, a land, a culture that is different from one’s own, knowing that this seemingly strange, unusual, foreign and exotic place in which I am now is the key to finding what I am made of, what I am capable of, who I really am.  It is the best way to learn that the beliefs I have about everything from the home to business to government do not necessarily match how others think or how they live.

Emma on the York wall, York. I lost those sunglasses somewhere in Wales.

It is also a good way to learn about the practical. Before going on a trip, take half the clothes and twice the money, a wise person once said.  On two occasions we offloaded part of our wardrobe to charity shops as our backpacks were bursting and we realized we didn’t need the extra pairs of pants, t-shirts and shorts.   On three occasions we sent parcels of small purchases and items we brought with us and didn’t need but wanted to keep back to the States.  On more occasions that I can to admit I have lost items – sunglasses, hat, scarf, good luck Chinese rabbit, corkscrew, Swiss Army Knife – but haven’t missed them (except for the rabbit – that was sad.) We have put ourselves on a budget, have been able to stick to it, with time for splurges here and there (our lunch at La Bécasse in Ludlow, for one.)

Granted, we haven’t been too tested in either the philosophical or the practical given that the journey hasn’t taken us beyond the Western world yet. In experiencing the Western tradition in a different cloth, I have made some observations along the way, things that have given me pause, puzzled me to the point where I ask myself “why the heck do they/don’t they do that?”  Here are a few examples:

The Three Fish, Shrewsbury. One of the many pubs that close from 3-6.

Take the pharmacy.  In Ludlow, a town of 10,000, the main pharmacy, similar to a Duane Reade or a Walgreen’s, opens at 9:30 AM and closes at 5:00 PM on weekdays, until 12:30 PM on Saturdays, and is closed on Sundays.  For people who work a typical 9-5 job, this schedule makes it difficult to get their prescriptions filled and collected, or pick up the odd bottle of aspirin, box of tissues or tube of toothpaste, forcing them to run these sort of errands during the work week at lunchtime, or on Saturdays.  But who wants to go to the pharmacy on a Saturday? Aren’t we supposed to be slowing down and relaxing?  This schedule also makes it difficult for the business owner to earn a living as those people passing by the pharmacy who remember that they are out of Ajax, Woolite or Listerine will go to the Tesco Supermarket down the street to do their shopping because the pharmacy isn’t open past 5. 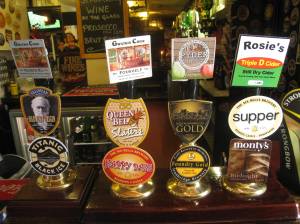 And the pub.  Take the case of the The Three Fish in Shrewsbury.  Here the bartender stops serving everyday between the hours of 3PM – 6PM and the pub is closed for these three hours.  This is a throwback to an earlier era when everyone in town headed to the pub for lunch and some pints and went back to work at 3 PM (or home to sleep it off).  The Three Fish certainly isn’t the only pub who still operates under these terms as we experienced this odd practice in such places as Durham, Cardiff and Bury St. Edmunds.   On a sunny Saturday afternoon  at the The Three Fish Steve at I were enjoying some drinks along with many other people – couples, families, groups of friends – when we heard the bell and the shout “Last orders!”  I looked at the clock: 2:45 PM.  She didn’t say “last orders,” did she?  Pubs are supposed to close at 11 PM.  This is no country pub in a country town with only two regulars.  This is city pub in Shrewsbury, for goodness sakes, and the place is packed with thirsty people ready to spend their money.  We ordered another round, an insurance drink, lest she really meant last orders, only to hear the bell again and the voice “It’s 3 PM.  We’re closed. Drink up.”  No grace period to quaff our beverages, no opportunity to order another.  We had to leave.  So, like the rest of our fellow drinkers, we sauntered over a nearby pub that was open down the street and gave them our business. Even the bartender who shut us down was there with us!  Steve asked her why the The Three Fish still closes down from 3 PM-6 PM and she replied: “Well, we have always done so.  And we can’t find anyone to fill that time anyway.”  Huh?

So, if you are ever at a pub in the UK don’t be shocked if you are unceremoniously kicked out at 3 PM.

Oh, and make sure you are not hungry past 2:30 PM.  They stop serving food then, too, even in the places that are open past 3 PM.

In this age of automated everything, signs greeting us at the post office encouraged us to use the newfangled stamp machines at the entrance.  We figured, we are only buying one stamp, we can just use the machine and forgo having to wait in line to talk to a teller.  After all, it is just one stamp.  One measly stamp.  One euro or so and we will be out of here.

The machine had directions in English and was simple enough to use.  However it would not respond to our request to purchase one stamp.  The number five kept showing up in one’s place and no matter how loudly Steve swore at the machine it was fixed on providing us with the bounty of five stamps.  We were in no mood for this sort of benevolence and were forced to abandon our provider of philatel ease and wait in line like all the other schmoes.   Finally our turn arrived and an exasperated Steve approached Postal Employee Number 666 at the window and said “One stamp, please.”

Steve:  But I don’t need five. I only need one.

Steve:  But I just need to send a postcard. To the United States.

Steve:  If I buy five, can I use the stamps in other parts of Europe?

PEN66:  No, the stamps are for the Netherlands only.

Steve:  But we are leaving for Munich in the morning.

PEN66: Who gives a shit.  (She didn’t say that, but if facial expressions could speak…)

So we left without our stamp.  We sent our postcard from our next port of call in Germany where we were able to purchase stamps in the quantity of our choice and receive service with a smile.

There will be more head-scratching moments in the next six months.  You can count on that.

Some already and never-before-seen photos of the first six months below: